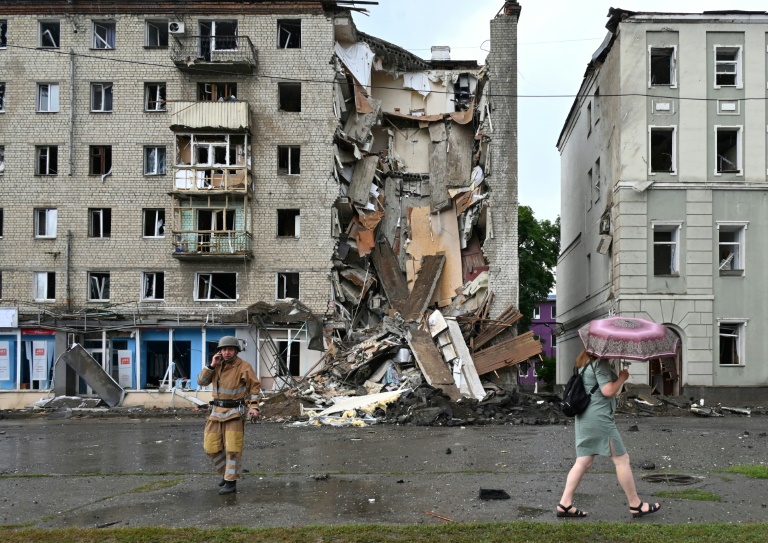 Ukraine’s second city of Kharkiv has been left without power after the latest wave of Russian strikes targeted energy stations across the country.

Officials said as many as nine power facilities were hit as Russian forces fired 76 missiles and carried out drone attacks across Ukraine.

One resident, Anastaisa, told the BBC that she heard “several explosions” as the strikes began on Friday morning.

“In a matter of minutes the lights started blinking,” the mother of a two-month-old child said. “Just 10 seconds later we were out of power, everything just went still and that’s it. At the moment there is also no water because the pumping stations cannot work when there’s no power in the city, so technically what we have now is a city without power and water supply.”

Oleg Synegubov, head of Kharkiv’s regional adminstration, said officials planned to have power restored by midnight, but power grid operator Ukrenergo warned that the scale of the damage could mean it will take longer to restore supplies.

The body said in a statement that the energy system had lost more than half of its capacity due to the latest strikes, and said priority would be given to “critical infrastructure – hospitals, water supply facilities, heat supply facilities, sewage treatment plants”.

Defence Ministry adviser Yuriy Sak told the BBC that emergency services were working to restore electricity supplies but the situation was “still difficult”. Russia’s frequent attacks mean that repairing the damage is getting harder.

Elsewhere, three people were killed and 13 more injured when a residential building was hit in Kryvyi Rih and a third died in Kherson. In the capital Kyiv, the city’s Metro was left at a standstill.

The alarm was raised across Ukraine on Friday and Commander-in-chief General Valeriy Zaluzhny said air defences had intercepted 60 of the 76 missiles fired, most of them cruise missiles.

Kyiv city officials said around 40 missiles had been fired at the capital alone – one of the biggest barrages since Russia’s 24 February invasion. Thirty-seven were brought down by air defences, it added.

“It’s very stressful but now I’m used to this,” said 42-year-old Oksana, who lives in the capital. “I don’t want our children to live through this, to be in basements, shelters, I don’t want this for them.”

Ukraine has accused Russia of “weaponising winter” by striking essential facilities as temperatures in much of the country are below freezing.

Three staff at power facilities in Dnipropetrovsk region were wounded by missile strikes.

Russia’s attacks also cut power in the Sumy region close to the northern border with Russia and in the central cities of Poltava and Kremenchuk.

Fifteen rockets were reportedly fired at Zaporizhzhia in the south while Kyiv Mayor Vitaliy Klitschko said several areas of the capital were hit. Damage to energy infrastructure had affected its water supplies and city metro lines were for the moment not running, he said.

Russia has launched more than 1,000 missiles and Iranian-made attack drones since the wave of strikes began on 10 October, although most of them have been intercepted by air defences. The biggest barrage, in mid-November, involved more than 100 missiles and drones.

UN human rights commissioner Volker Turk warned on Thursday that further attacks on power facilities could “lead to a further serious deterioration in the humanitarian situation and spark more displacement”.

Prime Minister Denys Shmyhal described the latest wave of strikes as “another attempt to commit genocide against the Ukrainian people”.

Earlier this week, Mr Shmyhal said this week that Russian strikes had damaged “all thermal and hydroelectric power plants”, leading to widespread blackouts and interruptions in heating and water supplies.

In some areas, electricity is only available a few hours per day.

“I’m angry,” said Elizavetta, 21. “They [Russia] are destroying our lives. We are used to it now. The most important thing is that Russia isn’t here.”

And Anastasia said that life was becoming more difficult as winter sets in.

“When it’s day time it is still ok, it is tolerable and I can manage the situation but when it’s dark outside this is when my problems begin because I need to see clearly, to measure baby formula and also to attend to the baby – those are stressful,” she said

“And, of course, just the effect that we are out of power creates a lot of tension and lots of stress. So we just survive through the night and when the day breaks it gets a bit better but we cannot compare it to our normal day.”

Meanwhile, Russian-backed proxy officials in Ukraine’s eastern Donbas region accused Ukrainian forces of shelling a town and a village overnight in the Luhansk region. Details of the deaths could not be confirmed.