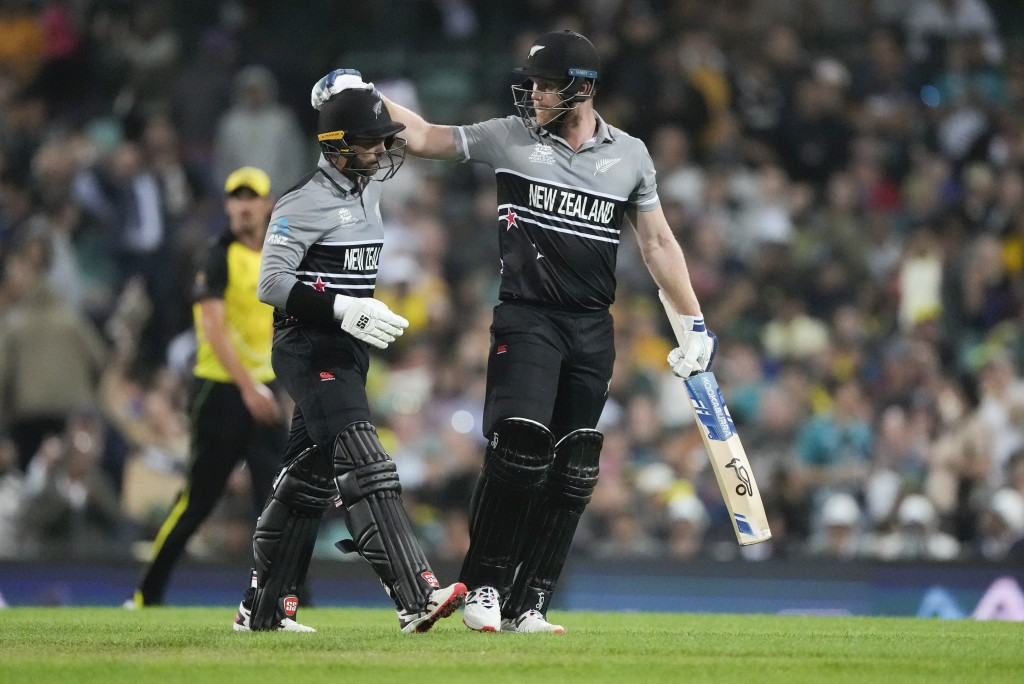 Devon Conway and Finn Allen plundered 46 runs off the first three overs to set New Zealand on course for a thumping 89-run win over defending champion Australia on Saturday in the opening game of the Super 12 stage at the Twenty20 World Cup.

Left-arm swing bowler Sam Curran took a career best 5-10 as England beat Afghanistan by five wickets to open its campaign in the second game of the day in Perth. Curran was named man of the match.

Chasing Afghanistan’s 112 runs, England scored 113-5 in a lackluster win with 11 balls to spare to join New Zealand as early winners in Group 1.

Less than a year after losing the 2021 final to Australia in Dubai, the New Zealanders dominated immediately after being sent in to bat in overcast conditions and posted 200-3, their highest-ever total in a T20 World Cup game.

Australia was bowled out for 111 in 17.1 overs in reply for its biggest-ever defeat in a T20 World Cup game, with Tim Southee taking the first and the last wickets to secure New Zealand’s first win here in 11 years.

“An outstanding day. Finn set the tone and another class innings from Devon,” New Zealand skipper Kane Williamson said. “Something to build on for our next one.”

Conway blazed an unbeaten 92 from 58 balls and hit the last ball of the innings for six. The end of New Zealand’s innings reflected the start, with the opening pair putting on 56 in 4.1 overs before Allen was bowled by Josh Hazlewood.

“Special performance by the boys tonight,” Conway said. “Credit to Finn how he started, he got the momentum going.

“Quite a young guy in his career but he’s explosive, and he’s fearless.”

He certainly was. The 23-year-old Allen, who only found out Friday night that he’d be starting, hit the second ball of the match for a boundary and the third for a six over mid-on, and then drove a boundary straight down the ground as New Zealand took 14 off the first over from paceman Mitch Starc.

They took 15 off the second over, with Conway turning the first ball from Hazlewood to the boundary at fine leg, and continued the onslaught against Australia’s high-caliber pace trio with 17 off the third over, bowled by Pat Cummins.

Allen, who had a reprieve when he was dropped on 19, clubbed 42 from 16 deliveries before he was bowled by a Hazlewood yorker to start the fifth over.

Conway continued in a 69-run second-wicket stand with Williamson, who scored a run-a-ball 23, Glenn Phillips (12) and Jimmy Neesham to keep the run-rate going at 10 per over.

Australia by contrast lost wickets regularly, beginning in the second over when David Warner (5) tried to hit across the line against Southee but only dragged it onto his thigh, then the back of his bat and onto his stumps.

Glenn Maxwell top scored for Australia with 28 while Southee (3-6) and Santner (3-31) took three wickets apiece and kept the run-flow down. The lopsided defeat already has Australia under pressure to make the top two in the group and reach the playoffs.

“They got the jump on us early in those first four overs with the bat and we never really recovered,” Australia captain Aaron Finch said. “They were in front of the game the whole way. We were totally outplayed.”

After winning the toss and putting Afghanistan to bat first, England made short work of the Afghanistan batting under lights.

Uzman Zadran (32) and Usman Ghani (30) made early contributions but from 109-5 Afghanistan lost 5-3 off 12 balls as the batting lost its way against Curran, who was on a hat trick starting the last over of the innings. Only eight boundaries and three sixes were hit in the entire Afghan innings.

Curran took 4-0 in six balls to hurry Afghanistan’s meek capitulation on a wicket that offered plenty of pace and bounce to the four-pronged swing and seam attack. His previous best was 3-25 against Australia in the lead up to this tournament.

Curran was well supported by Ben Stokes and Mark Wood with two wickets apiece, but the feature of the day was England’s catching — three in the outfield by Liam Livingstone, Moeen Ali and Adil Rashid, and then wicketkeeper Jos Butler taking a left-handed blinder diving to his left to get rid of captain Mohammad Nabi.

England didn’t have it easy in its run-chase, and lost five wickets regularly before Livingstone, who scored 29 off 21 balls, and Ali (8 not out) saw the side through. Butler (18), Alex Hales (19) and Dawid Malan (18) threatened but poor shot selection contributed their dismissals.

England will play Ireland on Wednesday, and Ashes-rival Australia on Friday in its next two outings.

Group 2 is set for a blockbuster opener on Sunday with archrivals India and Pakistan meeting at a sold out Melbourne Cricket Ground in a night match, after Sri Lanka and Ireland play in Hobart.