Inside a liberated Ukrainian city, and how NATO tactics helped free it 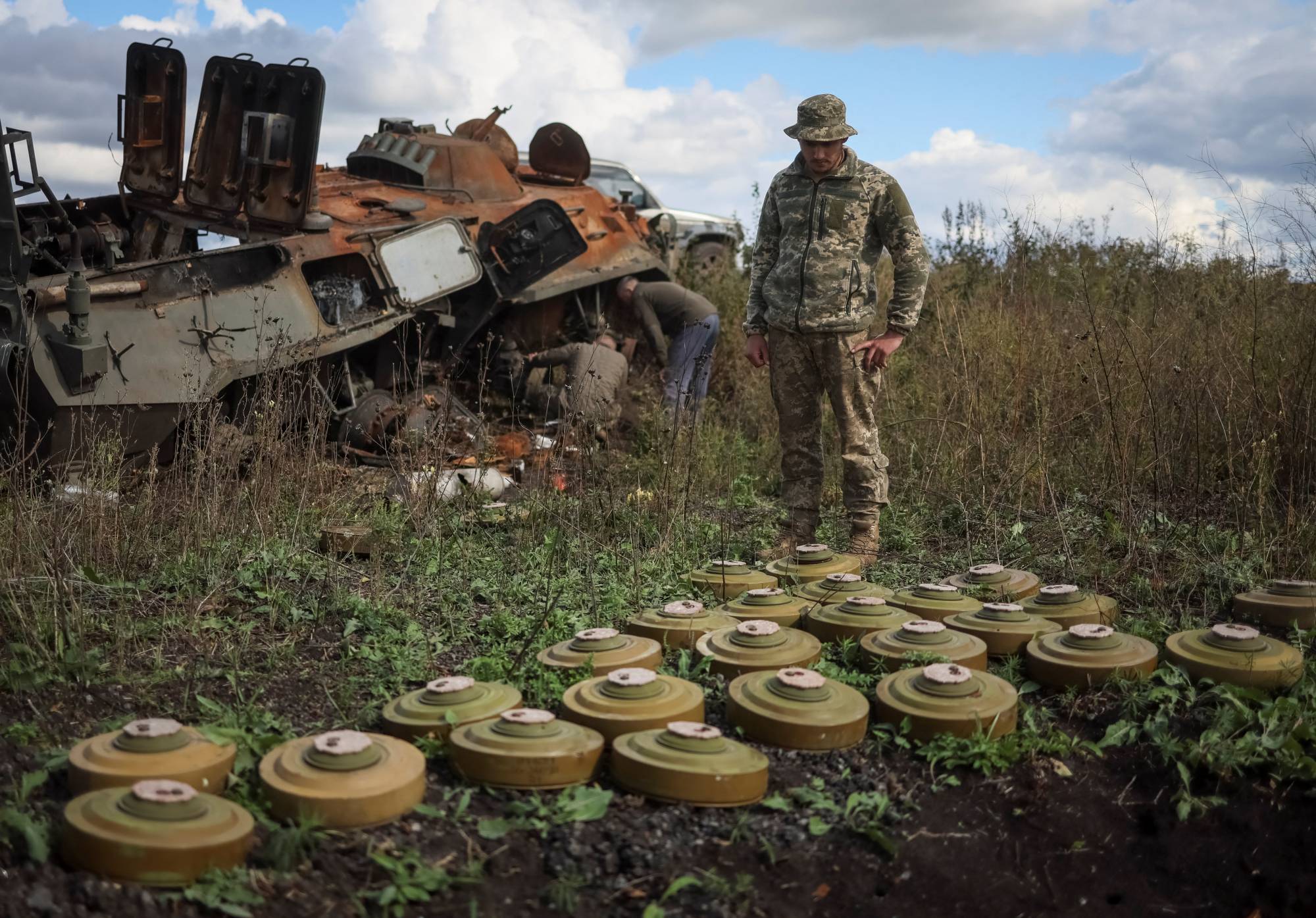 “Hi guys, nice to meet you,” our military escort shouted in lightly-accented American English. Barrel-chested and six feet tall, he shook our hands in a knuckle-crushing grip. “You can call me Chub,” he said with a broad smile.

Chub — a nom de guerre — was our guide through Kupiansk, a city contested by Russian and Ukrainian forces that lies directly on the front line and is less than 30 miles from the Ukraine-Russia border.

Bisected by the Oskil River and located in the Kharkiv Oblast region, Kupiansk is an important regional rail hub and one that ferried supplies to Russian forces in a broad swath of Northeast Ukraine during the region’s occupation.

Kupiansk lies near the zero line, a dimly defined and hotly contested zone along Ukraine’s expanding front. Although parts of eastern Kupiansk are contested, the city’s western side fell virtually without resistance.

We squeezed together into Chub’s battle-scarred Mitsubishi truck, a donation from Sweden. One window was missing, a section of plastic tarp duct taped over the opening, and the left side of the car riddled with jagged shrapnel holes from a nearby artillery strike. A puncture in the windshield — right in front of the driver’s seat — was patched with silicone.

The situation in Kupiansk is tense, and there is shelling virtually “every day,” Chub explained, adding that the town was within range of Russian artillery positions less than 10 kilometers from the river.

En route to Kupiansk, Chub told us his war stories. He fought the Russians during engagements at Bucha, Zaporizhia, and Lysychansk. He was among the first Ukrainian troops to liberate Balakliya, a hamlet occupied by the Russians during the early days of the war.

Chub’s M4A1 carbine, stamped “Columbia, S.C.” on the lower receiver, fit neatly on the dashboard against the windshield, a tangible sign of the immense military aid the United States has rushed to Ukraine.

Though some of the changes to the Ukrainian military — like Chub’s American-supplied M4 carbine — are easy to spot, significant structural changes are much more difficult to observe but have a greater effect on the battlefield than small arms used by individual soldiers.

Ukraine is moving away from the Soviet Union’s highly centralized and top-heavy command structure. It’s trying to empower noncommissioned officers to make decisions in battle — a concept the U.S. military calls “mission command.” The strategy ensures junior officers understand their commander’s intent but allows them considerable leeway in achieving their objective.

The strategy is bearing fruit.

Chub explained that before NATO established the training pipeline, officers would shout orders and cared more about rank than results. Now, though, “a young officer is usually a good officer.” There is a higher likelihood that Ukraine’s budding NATO-modeled officer corps have been trained “according to NATO standards” and are more likely to treat the soldiers under them with respect. They are also more effective on the battlefield.

Training aside, one of the most dramatic examples of how western weaponry has turned the tide of the war in Ukraine’s favor is evident in Ukraine’s recent counteroffensive in the south, around Kherson, and in the northeast, around Kharkiv.

Driving along with Chub, the mist and cloud cover thankfully provide some respite from the drones Russian spotters use to adjust artillery fire. But the rain also disguises the many potholes and crater’s actual depth, making for slow going on the road.

At the edge of Kupiansk, a Marshrutka taxibus stuffed to the ceiling with boxes is passing out humanitarian aid to residents. Here, Alexander, a 46-year-old local, explains what Kupiansk was like before liberation.

“Life during occupation was like being part of a colony,” Alexander said. Though Russian forces passed out some humanitarian aid, Alexander and his wife preferred to rely on food they had at home, as well as their backyard garden, rather than take Russian handouts. Alexander explained that the Russians also provided fuel to Kupiansk residents in limited, rationed quantities.

Despite the daily shelling, Alexander is happy Ukrainian forces liberated Kupiansk — “our entire street was happy!” But he acknowledges that some in Kupiansk had few qualms about receiving Russian aid or working with Russian forces.

After Ukrainian forces retook the city’s administrative buildings, they found a list of approximately 175 people in the Kupiansk Oblast region who accepted Russian passports. However, the list is incomplete, and the SBU — Ukraine’s military intelligence service — screens residents in newly liberated areas to weed out Russian collaborators and sympathizers.

Due to Kupiansk’s strategic significance and the rapidity with which Russian forces captured the city, Kupiansk escaped much of the wanton destruction Russia inflicted on other cities. Now, soldiers and residents are forced to take cover in basements, hiding from incessant Russian bombardment.

The city has no power or gas and only intermittent cell phone coverage. The few people in Kupiansk — those too infirm or stubborn to leave — subsist on humanitarian aid delivered by volunteers and cooked over open fires.

Shamil, a 25-year-old Ukrainian soldier, explained the current military situation from a basement bunker command post, but asked to hide his face to protect his identity. A native of Lutsk, in western Ukraine, Shamil’s parents are from Dagestan, a republic of Russia that borders Georgia, Azerbaijan, and the Black Sea.

He is not worried about Russia’s recent mobilization order. “More Russians will come,” he shrugged apathetically. “More will die.” But Russian mobilization puts him in a moral quandary.

He has friends and family in Dagestan. “It’s possible” they could be caught in Russia’s conscription net and sent to fight in Ukraine. However, the Russian region has become a hotbed of anti-war protest in recent days, prompted both by mobilization and the disproportionately high number of Russian casualties from Dagestan.

Shamil’s friends and family “aren’t zombies. They don’t support Russia’s war,” he emphasized with his hands. “First, I am Ukrainian,” and if they were to fight in Ukraine, “I would see an enemy,” Shamil said, “but I don’t know.”

Shelling follows a somewhat predictable pattern in Kupiansk: mornings are more active, the lunch hour generally quieter. Kupiansk’s residents take advantage of lulls in the shelling to get humanitarian aid, cook, or move about the small city.

One of Kupiansk’s main plazas sits next to the Oskil River and offers a view of the contested east bank. Minutes after arrival, the staccato of strafing machine gun fire could be dimly heard through the drizzle on the east side of the river.

Signs of the Russian occupation are visible throughout the city. A large propaganda poster still hangs on an administrative building near the plaza. “We are with Russia, one people,” it reads, a Russian flag emblazoned across the center.

Mere minutes after arriving at the plaza, the audible shriek of incoming artillery shells marks the end of the Russians’ lunch break and a good time to leave.

Russian occupation forces used the Kupiansk police station, a multi-story building with a below-ground basement prison, as a holding center for hundreds of locals. Alexander, an 18-year-old with a boyish face and the beginnings of a mustache, detailed his detention.

The Russians nabbed him off the street, ostensibly for breaking curfew while on his way home, and stuffed him in a prison cell built for three. There were already about 20 others inside the cell.

At night, Alexander slept on the floor under a bunk. During the day, he and other prisoners worked around the police station, filling sandbags and cleaning up after the Russian police officers. The prisoners also swept Kupiansk’s streets and cleaned up garbage.

While in detention, he was subjected to electric shocks and beaten. “Nobody said anything about when we would be freed,” Alexander explained. Only when Ukrainian forces approached the city did the Russians release the prisoners.

Despite the station’s thick concrete walls, the impact of nearby artillery reverberated through the basement, drowning out Alexander’s voice and cutting our conversation short.

Outside Kupyansk, Russian forces repurposed a sand quarry as an ammunition dump. Several stories below the ground surface and surrounded by heaped waste rock and soil, the area seemed a logical place for hundreds of thousands of rounds of ammunition.

Volodymyr, a 58-year-old retiree who volunteered for the army after Russia’s invasion on February 24th, explained that the quarry offered little protection from a recent HIMARS strike.

The approach to the quarry was littered with mangled bits of shrapnel, increasing in size with our proximity to the dump. Dented and unserviceable 152mm and 122mm artillery shells cluttered the steps into the quarry, some with their detonators still fixed in place.

Although most of the unexploded ordnance was too damaged to be useful, Volodymyr said that some had somehow escaped destruction and were examined for serviceability in Ukrainian weapons.

Outside the charred dump, Volodymyr scratched his chin and motioned with his rifle butt at the cardboard Russian ration boxes, empty tins of canned beef, and other refuse scattered haphazardly on the ground. “This is Russian culture,” he said sardonically before wandering back to his guard post, rifle slung smartly over his shoulder.

The latest reports from the Kupiansk front indicate Ukrainian forces have expanded the initial toehold they carved on the eastern bank of the river, and the counteroffensive appears to be rolling forward toward Lyman, another significant railway hub in Ukraine’s Donbas region. Capturing the city, occupied since late May, would consolidate Ukrainian gains and serve as a springboard for retaking surrounding parts of the region.