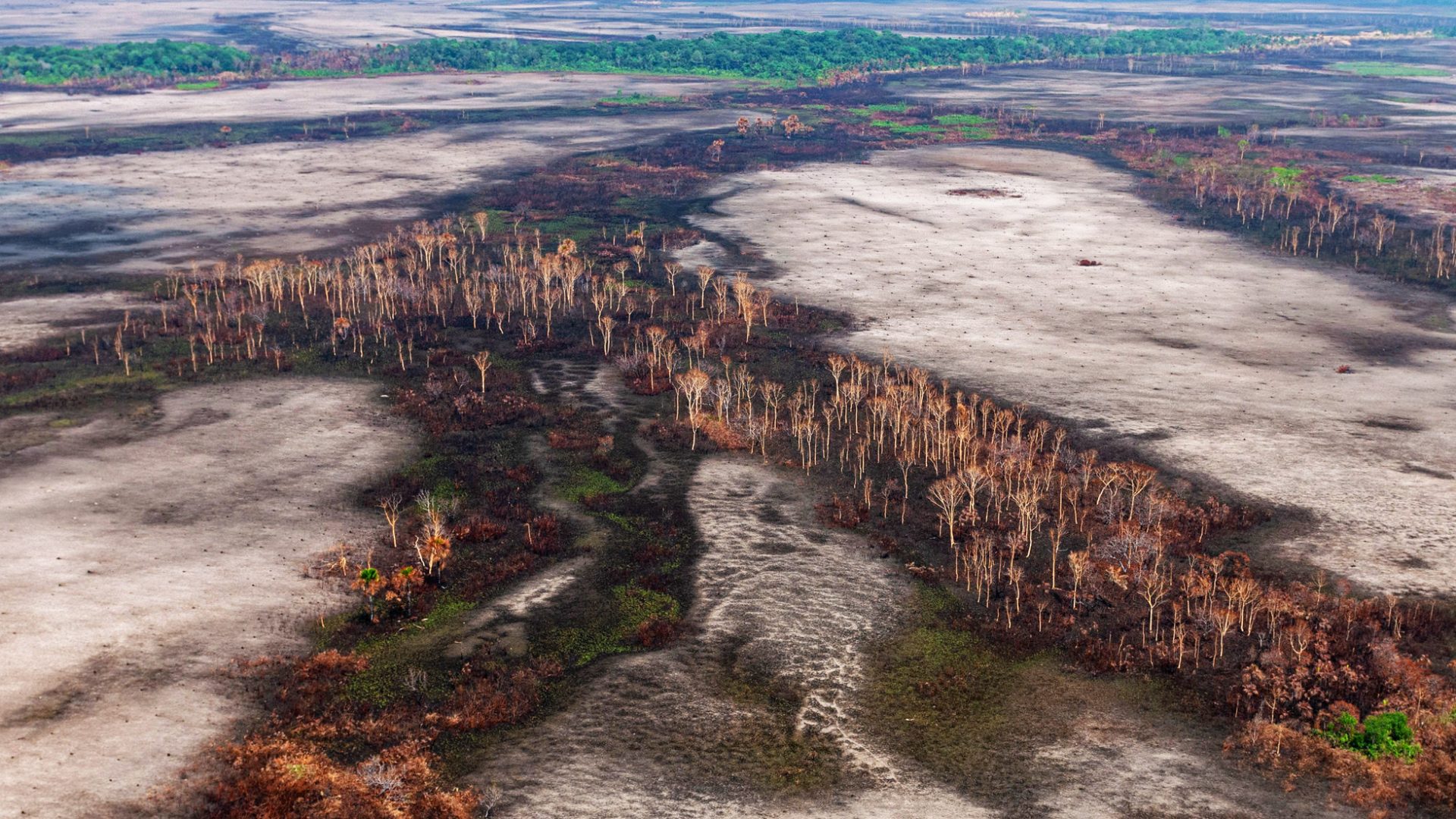 The European Union (EU) is importing Brazilian biodiesel to reduce greenhouse gas emissions generated by its transportation industry. However, purchases of fuel made from beef tallow have been causing the opposite effect and contributing to global warming. This is revealed by Repórter Brasil’s latest investigation published in the report ‘The green fuel that deforests,’ with versions in English and Portuguese.

By importing this type of biofuel – more than 10 million litres in the last two years – the EU ends up encouraging precisely the industry that contributes the most to emissions in Brazil: cattle.

In April 2020, JBS shipped 3.6 million litres of biodiesel to Europe – all produced with tallow from the same cattle it slaughters for beef. Public agencies and journalistic investigations often show that the company buys animals raised on deforested farms.

In Brazil, deforestation is the main source of carbon emissions into the atmosphere. And cattle is at the heart of the problem: 90% of the trees felled are replaced by pastures.

In October 2021, almost 5 million litres of biodiesel were shipped to Belgium by BSBios, a company based in Rio Grande do Sul state and acquired by the local branch of agribusiness giant Cargill. It was the largest volume of biodiesel exported by Brazil in a single operation since 2015. Shortly before that, between August and September 2021, more than 2 million litres were also sent by BSBios to Clover Energy, a Switzerland-based commodities trading company.

According to an investigation conducted by Repórter Brasil, both shipments may have included beef tallow as one of their components.

The European Union adopts measures to prevent biofuel production from replacing native vegetation. “As it may cause the release of CO2 stored in trees and soil, ILUC poses a risk to the greenhouse gas savings that result from increased production of biofuels,” the EU justifies on its website on the topic.

However, the International Sustainability & Carbon Certification (ISCC) – responsible for making sure that this does not happen – certified JBS and BSBios to export to Europe, despite the existing connection between livestock and deforestation. The regulation says that raw materials for green fuel cannot encourage biodiversity destruction, but it does not apply to companies using beef tallow in their production because this material is considered slaughter waste rather than a primary ingredient.

Questioned by Repórter Brasil, the ISCC stated that, in order to avoid disposal, “it is desirable that such materials can be put into further use, e.g. for the production of biofuels” (read the full answer). However, the agency did not explain the fact that it certifies an activity that is contributing to global warming; it only confirmed that one of its principles “refers to agricultural biomass, it does not apply in case of waste or residues, such as rendered animal fats.”

JBS also advocates the reuse of beef tallow for energy production: “Were it not for this use [biodiesel], that waste would be discarded and cause damage to society,” the meatpacking company argues, adding that “it has a responsible purchase policy for raw materials.”

BSBios did not disclose its beef tallow suppliers but says that European certification attests that its biodiesel reduces greenhouse gas emissions from 86% to 90% compared to fossil diesel. Cargill did not disclose the source of the product it imported either but guaranteed that they the company applies “the highest standards for sustainability and traceability certification to all raw materials.” The full text of the statements can be read here. Clover preferred “not to provide any details” about the deal involving its name.

The certificates issued by the ISCC guarantee that “biomass is not produced on land with high biodiversity and high carbon stock” — a criterion that could be applied to the Amazon, the largest tropical forest on the planet, where JBS has more than 30 slaughter plants whose purchase radius threatens 4.6 million hectares of native vegetation.

In fact, in October last year, the Federal Prosecution Service revealed that, between 2018 and 2019, JBS slaughtered 285,000 head of cattle in Pará that had been raised on properties that illegally deforested the Amazon – that is a third of all animals processed by the company in that Brazilian state during the period.

In 2020, Repórter Brasil showed evidence that the company itself used to transfer cattle from farms that were interdicted by environmental agencies to others with no irregularity — and then bought and slaughtered that cattle, ignoring their connection with forest destruction.

As for BSBios, the fact that it is located in Rio Grande do Sul, a state with its own cattle industry, does not rule out the possibility that the company also sources from suppliers operating in the Amazon – where more than 40% of Brazil’s cattle is concentrated. This is because BSBIOS has the largest production potential – at 2,600 m3/day – among biodiesel production facilities authorized to operate in Brazil that use beef tallow as raw material.

According to the company’s 2018 sustainability report, processed animal fats come from different regions. And the company goes a long way to get its raw material. The average distance between animal fat extraction plants and biodiesel production plants is 700.36 km, according to data from a Brazilian program to encourage biofuel production. The company uses other ingredients to manufacture its biodiesel – mainly soy – although animal fat is gaining importance in its production lines.

The biodiesel business has also yielded good results to JBS, which has already started the construction of its third biodiesel plant in Brazil, in Santa Catarina state. The other two are located in Lins, São Paulo, and Mato Grosso, in a region known as the Amazon’s arc of deforestation. With the new unit, the company expects to double its production of biodiesel, reaching 1 billion litres per year.

The operation also drove up raw material prices. According to Sérgio Beltrão, executive secretary of the Brazilian Union of Biodiesel and Biojetfuel, a kilo of beef tallow was worth less than R$ 2 in 2007; last year, it was traded at more than R$ 6.

The ISCC notes that while principle #1 of the audit is not applicable to beef tallow or other types of waste, companies like JBS must fulfil two other obligations to be certified: fully tracking their supply chains and proving effective reduction in greenhouse gas emissions by comparing the biofuel with its fossil ‘brother.’

Instead of making business harder for Brazilian exporters, both criteria make it easier. Since tallow is waste, supply chain traceability does not go back to pastures, which is the equivalent of plantations when soy or corn are used to produce biofuels. “In case of rendered animal fat, this so-called ‘point of origin’ is usually the rendering plant,” the ISCC explains.

With the shortest verifiable supply chain, calculation of emissions from beef tallow is also restricted to the processing stage, which is good for manufacturers. Biodiesel produced from beef tallow will save much more greenhouse gases in the atmosphere – compared to fossil diesel – than the product whose raw material requires verifying since cultivation. In Brazil, this difference allows JBS to generate more carbon credits proportionately than other participants of a Brazilian government program designed to reduce transportation emissions.

Cargill says that it adopts this criterion even when selecting its green fuel: “We are actively focusing on biofuels produced from renewable sources or waste such as used cooking oil, tallow and bleaching earth. These raw materials make a greater contribution to reduce certified emissions,” the company says.

JBS has already renewed its ISCC certificate twice since that 2020 sale. In the space dedicated to detailing its certifications on its website, the company tells the public that the ISCC “acknowledges the responsibility of companies in reduction of the emission of Greenhouse Gases (GHG), sustainable use of soil, protection of natural biospheres, and increasing social sustainability.”

The company also highlights the segment in its sustainability report. In the chapter on climate change, the business is presented as follows: “Among the highlights of [greenhouse gases] emission reduction are the operations of JBS Biodiesel.” The document says that JBS Biodiesel is “the world’s largest verticalized producer of biodiesel made from beef tallow and used cooking oil, and the first in Brazil.”

The ISCC informs that its work to verify biofuel supply chains goes beyond European Union requirements. The certifier checks if manufacturers take measures to protect the soil, air and water, and respect human and labour rights.

If it had expanded its view to the entire cattle supply chain, the ISCC might have denied JBS’s certification for buying animals from a rancher who used slave labour in his farm. In April 2018, Brazilian authorities found 30 employees of Maurício Pompeia Fraga transporting cattle on foot on a 900-kilometre journey: four months with no day off, no proper place to sleep, no drinking water or bathroom, and no formal employment contract. A 16-year-old boy was among the workers. JBS only interrupted its business relationship with the rancher after his name was included on the Ministry of Labour’s so-called dirty list in 2021, although the inspection had taken place in 2018. During that time, one of JBS’ directors gave public praise to Fraga on TV.

While BSBios and Cargill do not disclose the origin of the biodiesel they are trading in Europe, what JBS prefers to keep secret is the company and the country that will buy its 2020 shipment. It only said that it arrived at the port of Rotterdam, in the Netherlands – the main gateway for products to enter Europe.

Repórter Brasil asked JBS and the ECB Group – responsible for the logistics of the operation – about the final destination, but both claimed business secrecy to deny the information. The full statements can be read here.

In 2014, JBS disclosed the negotiation of 6.7 million litres of biodiesel with Dutch company Argos. “It is the largest independent fuel distributor in northern Europe. The fuel will be used in the mixture with conventional diesel for later distribution,” said the company’s sustainability report at the time. The certification was given by the ISCC.

Argos belongs to the Varo group, the same that sold, in 2019, its Brazilian subsidiary to the ECB Group – which brokered JBS’ business with the European Union. The Dutch operation in Brazil, in turn, was responsible for export logistics in 2014. The ECB Group is also the controller of BSBios.

Faced with the coincidences, Repórter Brasil asked Varo if it had purchased biodiesel from JBS again in 2020, but the company reported that “VARO Energy, as a matter of principle, does not provide information on any commercial activities or counterparties it engages with.” Nevertheless, it stressed that it “it applies a very strict procurement policy,” which includes monitoring the origin of the fuels it distributes.