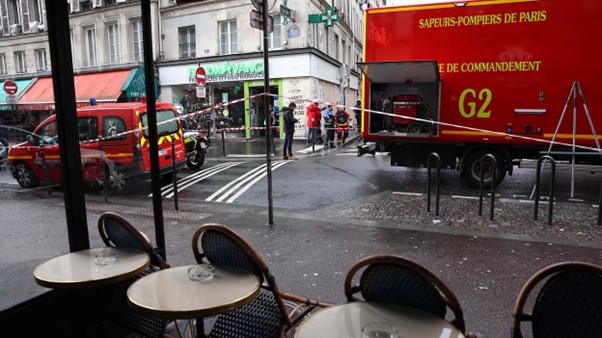 PARIS: A 69-year-old gunman opened fire at a Kurdish cultural center and a hairdressing salon in Paris on Friday, killing three people and injuring three others, witnesses and prosecutors said.
The shots shortly before midday (1100 GMT) caused panic in rue d’Enghien in the trendy 10th district of the French capital, a bustling area of shops and restaurants that is home to a large Kurdish population.
The shooting shook the Kurdish community in Paris and sparked skirmishes between angry Kurds and police. It also rattled merchants in the bustling neighborhood in central Paris on the eve of Christmas weekend and put officers on alert for more violence.
Witnesses told AFP that the gunman, a white Frenchman with a history of racist violence, initially targeted the Kurdish cultural center before entering a hairdressing salon where he was arrested.
Of the three wounded people, one was being given intensive care in hospital and two were treated for serious injuries, officials said.

The Kurdish community center, called Center Ahmet Kaya, is used by a charity that organizes concerts and exhibitions, and helps the Kurdish diaspora in the Paris region.
Within hours of the attack, Kurdish protesters clashed with police, who used teargas in an attempt to disperse them as they tried to break through a police cordon deployed to protect Interior Minister Gerald Darmanin who had arrived at the scene.
Darmanin said the suspect was clearly targeting foreigners and had acted alone and was not affiliated with any extreme-right or other radical movements.
Demonstrators threw objects at police while voicing fury over an attack they saw as deliberate and which they said French security services had done too little to prevent.
Several cars parked in the area as well as police vehicles had their windows smashed as protesters threw bricks.
A gathering outside the cultural center was ongoing on Friday evening after order was restored.
The alleged shooter, named as William M. in the French media, is a gun enthusiast with a history of weapons offenses who had been released on bail earlier this month.
The retired train driver was convicted for armed violence in 2016 by a court in the multicultural Seine-Saint-Denis suburb of Paris, but appealed.
A year later he was convicted for illegally possessing a firearm.
Last year, he was charged with racist violence after allegedly stabbing migrants and slashing their tents with a sword in a park in eastern Paris.
“He is crazy, he’s an idiot,” his father was quoted as saying by the M6 television channel.
He had been held in provisional detention in that case until Dec. 12, when he was released under judicial supervision, ordered to get psychiatric care and banned from carrying weapons.
French President Emmanuel Macron wrote on Twitter that “the Kurds in France have been the target of an odious attack in the heart of Paris.”
German Chancellor Olaf Scholz sent his condolences, saying “a terrible act has shaken Paris and France today.”
US Secretary of State Antony Blinken expressed his “deepest sympathies” for the victims, writing on Twitter that his thoughts were with the Kurdish community and people of France on this “sad day.”
French authorities are likely to face questions in the coming days over why the gunman had been recently released on bail given his criminal record and previous weapons offenses.
He suffered facial injuries on Friday and had been taken to hospital for treatment.
Darmanin told reporters at the scene that while the attacker “was clearly targeting foreigners,” it was “not certain” that the man was aiming to kill “Kurds in particular.”
“We yet don’t know his exact motives,” he said, while adding that he was not a known member of a far-right political group.
The Kurdish Democratic Council of France (CDK-F), an umbrella group for Kurds in France which uses the cultural center as its headquarters, said in a statement it considered the shooting to be a “terror attack.”
Abdulkarim Omar, the representative of the Kurdish-led autonomous administration in northeast Syria to Europe, also condemned the attack as a “cowardly terrorist act.”
Some members of the Kurdish center could be seen weeping and hugging each other for comfort after the shooting which revived traumatic memories of the murders of three Kurdish activities in January 2013.
“It’s starting again. You aren’t protecting us. We’re being killed!” one person could be heard shouting at police at the scene.
The 2013 murders were widely believed to be the work of a Turkish intelligence agent, but the Turkish man arrested and charged with the killings died in 2016 shortly before his trial.
Often described as the world’s largest people without a state, the Kurds are a Muslim ethnic group spread across Syria, Turkiye, Iraq and Iran.
The CDK-F said the attack occurred “following multiples threats from Turkiye, an ally of Daesh.”
There is no indication of Turkish involvement in Friday’s violence.
Ankara launches regular military operations against the Kurdistan Workers’ Party (PKK) — a designated terrorist group by the European Union and the United States — and Kurdish groups it accuses of being allies in Syria and Iraq.
The PKK has waged an insurgency against the Turkish state since 1984, at first seeking a Kurdish homeland and latterly in pursuit of greater political autonomy for Kurds.