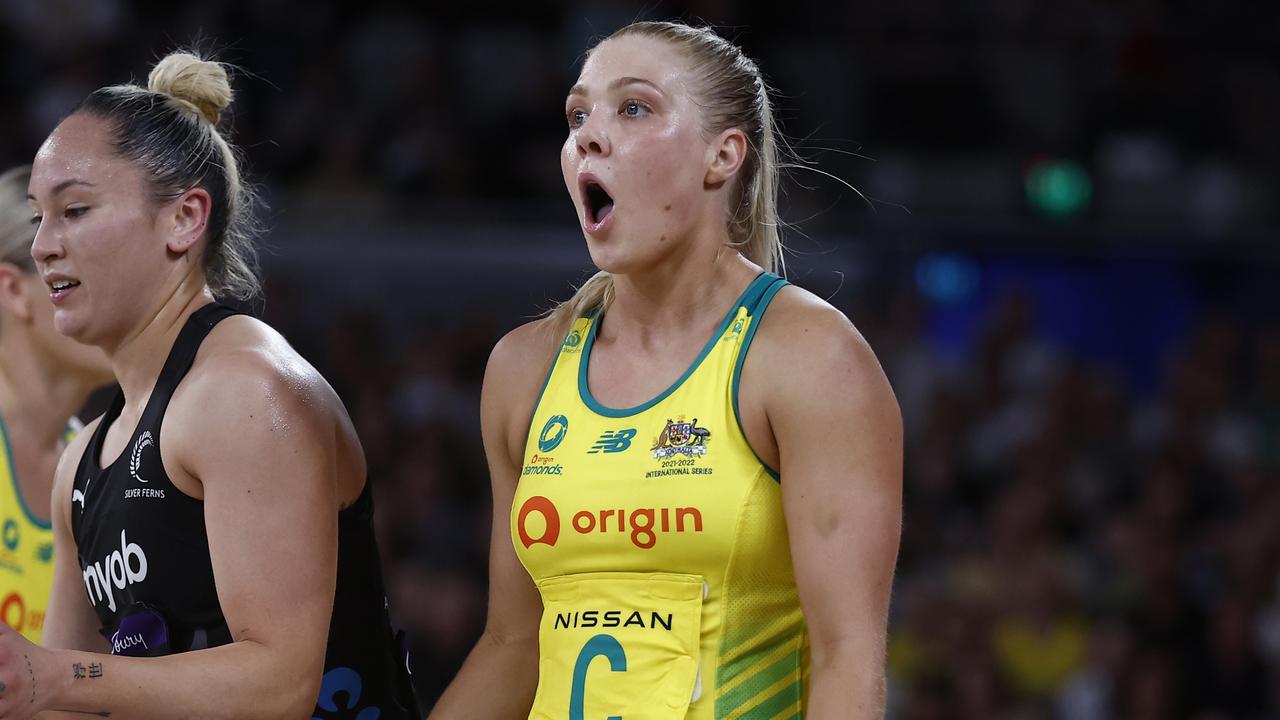 Next week, for the first time in more than two decades, an Aboriginal player is due to line up for Australia’s national netball team – the Diamonds.

It’s a historic occasion and a remarkable personal achievement for Donnell Wallam, who only began playing the sport professionally about a year ago.

But the moment has been overshadowed by an off-court showdown between the team and a firm owned by Australia’s richest person, after Ms Wallam privately raised concerns about its Indigenous record.

Mining heiress Gina Rinehart – one of the biggest private investors in Australian sport – had promised Netball Australia (NA) A$15m ($9.5m; £8.4m), though a four-year partnership deal with her company Hancock Prospecting that was announced last month.

But after a week of controversy, Hancock Prospecting on Saturday said the partnership – which was supposed to help the Diamonds remain one of the world’s most dominant sporting teams – would “regrettably” not go ahead.

It did not wish to add to “netball’s disunity problems”, the company said in a statement.

It announced it would also pull funding for The West Coast Fever – a team in the Super Netball league, the nation’s top-tier competition – but would supply four months of financial support while both teams found other sponsors.

NA said all parties had made “every effort” but they were not able to achieve “a mutually satisfactory outcome”.

The loss would impact every level of the sport in Australia, chief executive Kelly Ryan said.

Though she hasn’t spoken publicly, Ms Wallam – the squad’s only Aboriginal player – is widely reported to have told teammates she was uncomfortable wearing the logo.

She is said to be particularly concerned about racist comments made by Hancock Prospecting’s founder – Ms Rinehart’s father, Lang Hancock.

In 1984, as part of a TV interview, he suggested Aboriginal people should “breed themselves out”.

“I would dope the water up so that they were sterile… that would solve the problem,” he said.

More recently, the wider mining industry has also been accused of exploiting Aboriginal communities’ land and goodwill – though it’s unclear if Ms Wallam discussed this.

The goal shooter wanted to ask the sport’s governing body if she could wear the uniform without Hancock’s logo, according to multiple Australian media reports.

Ms Wallam’s teammates reportedly then refused to wear the logo, in solidarity with her.

Some were said to be concerned about climate change too – Hancock Prospecting is a huge fossil fuels supplier – but this was denied by NA sources in local media.

“The Diamonds have a ‘sisters in arms’ mantra,” Netball Players Association boss Kathryn Harby-Williams told The Australian. “The team did not want their teammate… to have to make her debut for Australia wearing a different uniform.”

After the dispute became public knowledge, some people praised the players while others defended Ms Rinehart as not responsible for the views of her father, who died 30 years ago.

There was criticism for NA too, over claims they didn’t consult properly with players before signing the deal, but on Tuesday it doubled down and reiterated its support for the partnership.

As the pressure on the team mounted, players appeared to walk back their stance.

“We’re great supporters of Hancock, we want to make this partnership work with them,” Diamonds captain Liz Watson told the Australian Broadcasting Corporation (ABC) on Tuesday.

Sharon Finnian-White – a mentor to Ms Wallam and the last Aboriginal netballer to play for the Diamonds, in 2000 – suggested the situation could be resolved with a simple apology.

“If Gina came out and said publicly: ‘I denounce what my dad said… that’s not my value set,’ I think Donnell would be okay with that,” she told the ABC.

But one was not forthcoming, and Hancock Prospecting and Ms Rinehart on Saturday expressed frustration that sport was being “used as the vehicle for social or political causes”.

“There are more targeted and genuine ways to progress social or political causes without virtue signalling or for self-publicity,” they said in a statement.

The company defended itself by saying it helps provide training, employment and education opportunities in Aboriginal communities, as well as making significant royalty payments to traditional owners for mining their land.

“Hancock and Ms Rinehart would only ever want athletes to wear the Hancock logo if the athletes were proud to do so.”

Ms Finnian-White has said it is disappointing to see Ms Wallam blamed for the controversy.

“My understanding was that it wasn’t just about social justice, but environmental issues too… All of a sudden now, it’s all back on Donnell,” Ms Finnian-White told the ABC.

“She must be feeling so isolated.”

“This always happens to our people and I’m sick of it.”

Ms Wallam’s teammates were in an extremely difficult situation too, he told the BBC.

But it is frustratingly common to see Indigenous athletes bravely speak up – particularly on racism – only to end up being painted as villains, the University of Melbourne Pro Vice Chancellor said.

Dr Judd points to Australian Football League (AFL) champion Adam Goodes, who was “booed out of the game” in 2015, a few years after he confronted a young spectator who had racially abused him during a match.

“He very quickly became the baddie in the situation… a scary black man bullying an innocent teenage girl,” he said of Goodes, an Australian of the Year and two-time AFL best-and-fairest winner.

Such incidents leave many Indigenous athletes feeling like public acceptance or affection is conditional on them being silent and grateful, Dr Judd says.

And they drive Aboriginal people out of sport, something he says Australian codes – particularly netball – cannot afford to do.

The Super Netball league currently has just one current Aboriginal player – Ms Wallam – and only three have played for the Diamonds in their 84-year history.

NA says it’s committed to increasing Indigenous participation, but this week a former board member, Nareen Young, said racism exists “at every level” of the sport.

In response, NA said it took “any claim of racism extremely seriously”.

“Netball Australia made a public commitment [in 2020] to listen, learn and change by engaging with Aboriginal and Torres Strait Islander peoples and hearing about their experiences within netball,” it said in a statement to News Corp Australia, adding “this incredibly important work continues”.

Racism is not just a netball problem, Dr Judd says.

But NA’s handling of this situation is unlikely to help it address its diversity issues.

“This sends a very bad message to young Indigenous people… [that] ‘you’re not as important to us as corporate dollars and your points of view about how the sport should be managed and its future direction are not taken seriously.'”