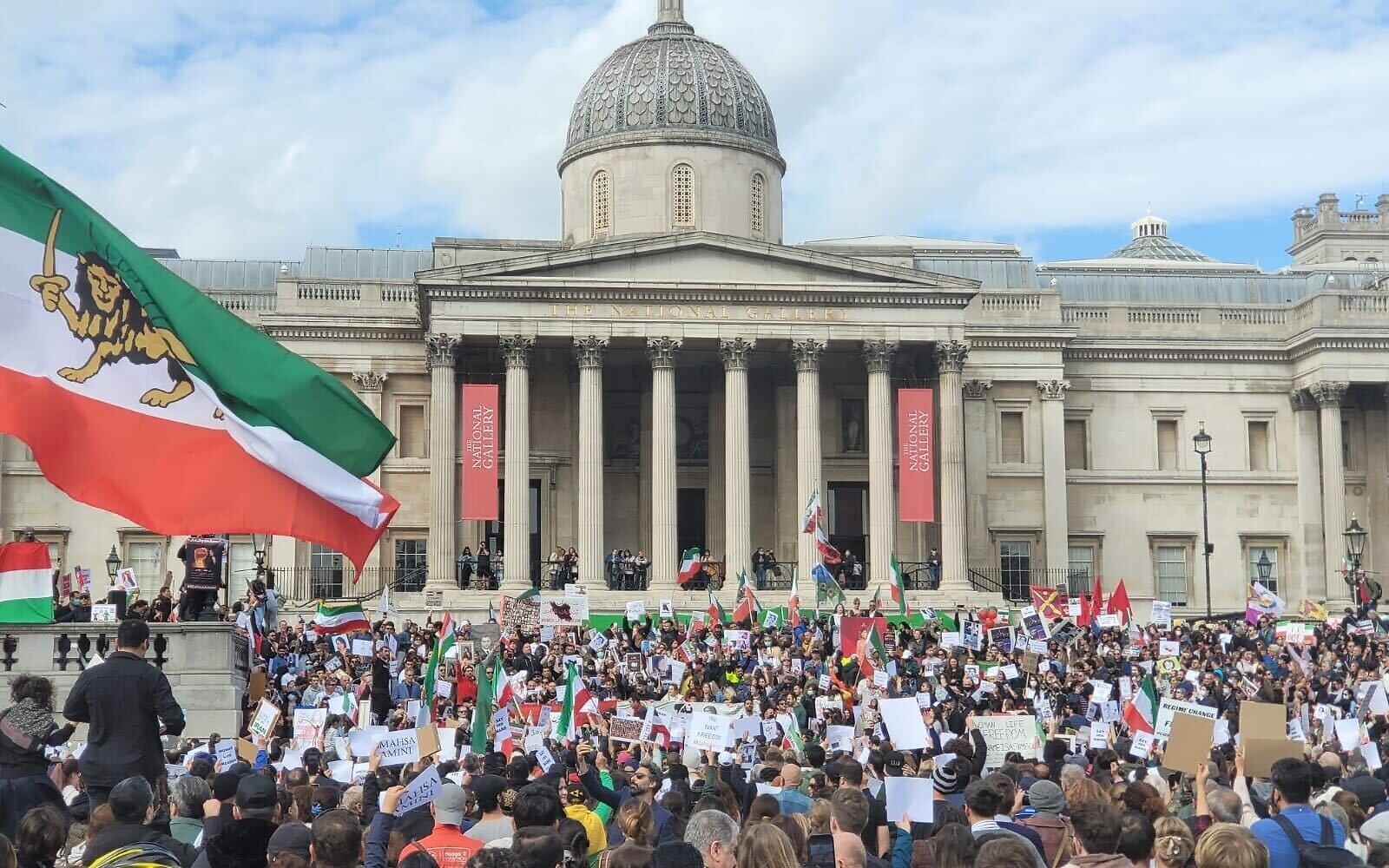 Iranian shopkeepers and factory workers said to be on strike as 80,000 protesters in Berlin hear calls for sanctions

Shopkeepers and factory workers reportedly went on strike in Iran on Saturday as women-led nationwide protests sparked by the death in custody of Mahsa Amini entered a sixth week and solidarity rallies were held around the globe.

The death of 22-year-old Amini, after her arrest for allegedly breaching Iran’s strict dress code for women, has fuelled the biggest protests seen in the Islamic Republic for years.

Young women have led the charge, removing their headscarves, chanting anti-government slogans and confronting the security forces, despite a crackdown that human rights groups say has killed at least 122 people.

Activists issued a call for fresh demonstrations as Iran’s working week began on Saturday, but it was difficult to gauge the turnout because of curbs on internet access.

“On Saturday … We will be together for freedom,” activist Atena Daemi said in a Twitter post that bore an image of a bare-headed woman raising her fist.

“There are various gatherings in some universities, which are decreasing every day, and the riots are going through their final days,” he said.

The 1500tasvir social media channel told AFP there were “strikes in a couple of cities including Sanandaj, Bukan and Saqez”, while adding it was difficult to see evidence of them online as “the internet connection is too slow”.

Saqez, in the western province of Kurdistan, is Amini’s home town, where anger flared at her burial last month, helping trigger the protest movement.

Some female students among them did not wear the mandatory headscarf.

In north-western Iran, dozens of students clapped and chanted slogans during a protest at the Tabriz University of Medical Sciences, verified footage showed.

Iran accused its arch-enemy the US of seeking to use the protests to gain concessions in talks aimed at restoring the 2015 nuclear agreement.

“The Americans continue to exchange messages with us, but they are trying to fan the flames of what has been going on inside Iran in recent days,” said the foreign minister, Hossein Amir-Abdollahian.

The organisers of a mass rally in Berlin in solidarity with the Iranian protesters called on “democratic governments … to stop negotiating with the criminal state called the Islamic Republic”.

In a statement, the Iranians for Justice and Human Rights group also called for the expulsion of Iran’s ambassadors.

“We are not asking you to interfere in Iran, wage war or sanction Iran’s people,” it said. “We want you to impose targeted sanctions on the leaders, operatives, oligarchs and lobbyists of the Islamic Republic.”

The Berlin rally, which police said drew more than 80,000 people, was one of a number of demonstrations around the world, including in Australia and Japan.

Organisers said Iranians had travelled from the US, Canada and all over the EU.

“From Zahedan to Tehran, I sacrifice my life for Iran,” human rights activist Fariba Balouch said after giving a speech at the Berlin gathering, referring to Iranian cities swept up in the protests. The crowd responded with “Death to Khamenei”, referring to Iran’s supreme leader, Ayatollah Ali Khamenei.

Anti-government activists said the Berlin march was the largest-ever demonstration against the Islamic Republic by Iranians abroad.

A teachers’ union in Iran has called for a nationwide strike on Sunday and Monday over the crackdown that rights group Amnesty International says has cost the lives of at least 23 children.

The Coordinating Council of Teachers Syndicates said the “sit-in” would be in response to “systematic oppression” by the security forces at schools.

Activists have also accused the authorities of a campaign of mass arrests and travel bans to quell the protests, with athletes, celebrities and journalists caught up in the dragnet.

Overnight an Iranian climber, who was reportedly placed under house arrest for competing abroad last weekend without a headscarf, thanked her supporters on Instagram.

Elnaz Rekabi, 33, wore only a headband in an event at the Asian Championships in Seoul, in what many saw as gesture of solidarity with the Amini protests.

“I sincerely thank all those who came to the airport for welcoming me, I love you,” Rekabi said in her first social media comments since returning on Wednesday to a hero’s welcome.

The BBC and London-based Iran International television said on Friday that Rekabi had been placed under house arrest. Her phone had reportedly been seized from her before she flew home.

On Friday, the New York-based Center for Human Rights in Iran called on the International Federation of Sport Climbing to do more to protect Rekabi and all Iranian athletes.