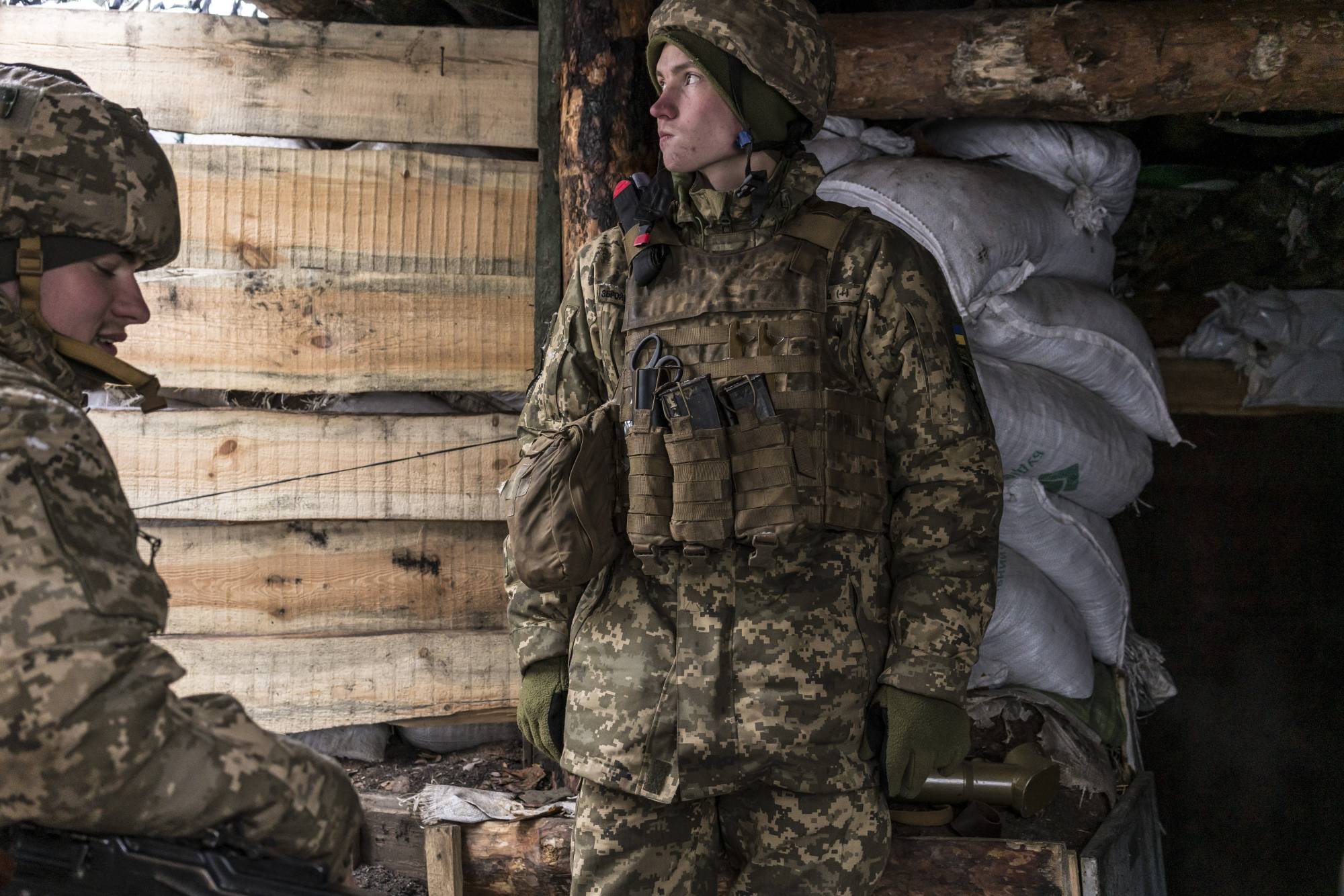 As Russian troops press ahead with a grinding campaign to seize eastern Ukraine, the nation’s ability to resist the onslaught depends more than ever on help from the United States and its allies — including a stealthy network of commandos and spies rushing to provide weapons, intelligence and training, according to U.S. and European officials.

Much of this work happens outside Ukraine, at bases in Germany, France and Britain, for example. But even as the Biden administration has declared it will not deploy American troops to Ukraine, some C.I.A. personnel have continued to operate in the country secretly, mostly in the capital, Kyiv, directing much of the vast amounts of intelligence the United States is sharing with Ukrainian forces, according to current and former officials.

At the same time, a few dozen commandos from other NATO countries, including Britain, France, Canada and Lithuania, also have been working inside Ukraine. The United States withdrew its own 150 military instructors before the war began in February, but commandos from these allies either remained or have gone in and out of the country since then, training and advising Ukrainian troops and providing an on-the-ground conduit for weapons and other aid, three U.S. officials said.

Few other details have emerged about what the C.I.A. personnel or the commandos are doing, but their presence in the country — on top of the diplomatic staff members who returned after Russia gave up its siege of Kyiv — hints at the scale of the secretive effort to assist Ukraine that is underway and the risks that Washington and its allies are taking.

Ukraine remains outgunned, and on Saturday, Russian forces unleashed a barrage of missiles on targets across the country, including in areas in the north and west that have been largely spared in recent weeks. President Biden and allied leaders are expected to discuss additional support for Ukraine at a meeting of the Group of 7 industrialized nations that begins in Germany on Sunday and at a NATO summit in Spain later in the week.

Shortly after Russia invaded Ukraine in February, the Army’s 10th Special Forces Group, which before the war had been training Ukrainian commandos at a base in the country’s west, quietly established a coalition planning cell in Germany to coordinate military assistance to Ukrainian commandos and other Ukrainian troops. The cell has now grown to 20 nations.

Army Secretary Christine E. Wormuth offered a glimpse into the operation last month, saying the special operations cell had helped manage the flow of weapons and equipment in Ukraine. “As the Ukrainians try to move that around and evade the Russians potentially trying to target convoys, you know, we are trying to be able to help coordinate moving all of those different sort of shipments,” she said at a national security event held by the Atlantic Council.

“Another thing I think we can help with,” she said, “is intelligence about where the threats to those convoys may be.”

The cell, which was modeled after a structure used in Afghanistan, is part of a broader set of operational and intelligence coordination cells run by the Pentagon’s European Command to speed allied assistance to Ukrainian troops. At Ramstein Air Base in Germany, for example, a U.S. Air Force and Air National Guard team called Grey Wolf provides support, including on tactics and techniques, to the Ukrainian air force, a military spokesman said.

The commandos are not on the front lines with Ukrainian troops and instead advise from headquarters in other parts of the country or remotely by encrypted communications, according to American and other Western officials, who spoke on the condition of anonymity to discuss operational matters. But the signs of their stealthy logistics, training and intelligence support are tangible on the battlefield.

Several lower-level Ukrainian commanders recently expressed appreciation to the United States for intelligence gleaned from satellite imagery, which they can call up on tablet computers provided by the allies. The tablets run a battlefield mapping app that the Ukrainians use to target and attack Russian troops.

On a street in Bakhmut, a town in the hotly contested Donbas region of eastern Ukraine, a group of Ukrainian special operations forces had American flag patches on their gear and were equipped with new portable surface-to-air missiles as well as Belgian and American assault rifles.

“What is an untold story is the international partnership with the special operations forces of a multitude of different countries,” Lt. Gen. Jonathan P. Braga, the commander of U.S. Army Special Operations Command, told senators in April in describing the planning cell. “They have absolutely banded together in a much outsized impact” to support Ukraine’s military and special forces.

Representative Jason Crow, a Colorado Democrat on the House Armed Services and Intelligence Committees, said in an interview that the relationships Ukrainian commandos developed with American and other counterparts over the past several years had proved invaluable in the fight against Russia.

“It’s been critical knowing who to deal with during chaotic battlefield situations, and who to get weapons to,” said Mr. Crow, a former Army Ranger. “Without those relationships, this would have taken much longer.”

The C.I.A. officers operating in Ukraine have focused on directing the intelligence that the U.S. government has been providing the Ukrainian government. Most of their work has been in Kyiv, according to current and former officials.

While the U.S. government does not acknowledge that the C.I.A. is operating in Ukraine or any other country, the presence of the officers is well understood by Russia and other intelligence services around the world.

But the agency’s expertise in training is in counterinsurgency and counterterrorism operations, former intelligence officials say. What Ukrainians need right now is classic military training in how to use rocket artillery, like the High Mobility Artillery Rocket Systems, or HIMARS, and other sophisticated weaponry, said Douglas H. Wise, a former deputy director of the Defense Intelligence Agency and retired senior C.I.A. officer.

The Biden administration has so far sent four of the mobile multiple-launch rocket systems to Ukraine and announced on Thursday that four more were on the way. They are the most advanced weapons the United States has so far supplied Ukraine, with rockets that have a range of up to 40 miles, greater than anything Ukraine has now.

Pentagon officials say a first group of 60 Ukrainian soldiers have been trained on how to use the systems and a second group is now undergoing training in Germany.

Gen. Mark A. Milley, the chairman of the Joint Chiefs of Staff, said the training had begun in a “rational and deliberate” manner, as Ukrainians who have historically used Soviet-era systems learn the mechanics of the more high-tech American weapons.

“It’s no good to just throw those systems into the battlefield,” General Milley told reporters traveling with him on a recent flight back to the United States after meetings with European military chiefs in France.

After a meeting in Brussels this month, General Milley and military leaders from nearly 50 countries pledged to increase the flow of advanced artillery and other weaponry to Ukraine.

“That all takes a bit of time, and it takes a significant amount of effort,” General Milley said. American troops need six to eight weeks to learn how to use the systems, but the Ukrainians have a two-week accelerated training program, he said.

Still, former military officials who have been working with the Ukrainian military have expressed frustration with some of the training efforts.

For instance, Ukrainians have struggled to evacuate soldiers wounded at the front lines. The United States could step up front-line first-aid training and advise the Ukrainians on how to set up a network of intermediate mobile hospitals to stabilize the wounded and transport them, former officials said.

“They are losing 100 soldiers a day. That is almost like the height of the Vietnam War for us; it is terrible,” a former Trump administration official said. “And they are losing a lot of experienced people.”

Army Green Berets in Germany recently started medical training for Ukrainian troops, who were brought out of the country for the instruction, a U.S. military official said.

From 2015 to early this year, American Special Forces and National Guard instructors trained more than 27,000 Ukrainian soldiers at the Yavoriv Combat Training Center in western Ukraine near the city of Lviv, Pentagon officials said.

Military advisers from about a dozen allied countries also trained thousands of Ukrainian military personnel in Ukraine over the past several years.

Since 2014, when Russia first invaded parts of the country, Ukraine has expanded its small special forces from a single unit to three brigades and a training regiment. In the past 18 months it has added a home guard company — trained in resistance tactics — to each of those brigades, Gen. Richard D. Clarke, the head of the Pentagon’s Special Operations Command, told the Senate in April.

The Ukrainian military’s most acute training problem right now is that it is losing its most battle-hardened and well-trained forces, according to former American officials who have worked with the Ukrainians.

The former Trump administration official said Special Operations Command had small groups of American operators working in the field with Ukrainian officials before the war. The American teams were sometimes called Jedburgh, a reference to a World War II effort to train partisans behind enemy lines, the official said.

The modern special operations teams mainly focused on training in small-unit tactics but also worked on communications, battlefield medicine, reconnaissance and other skills requested by Ukrainian forces. Those efforts, the official said, ended before the Russian invasion but would have been helpful if they had continued during the war.

Having American trainers on the ground now might not be worth the risks, other former officials said, especially if it prompted an escalation by President Vladimir V. Putin of Russia.

“Would the enhancement of the training be worth the possible price that is going to have to be paid?” Mr. Wise said. “An answer is probably not.”