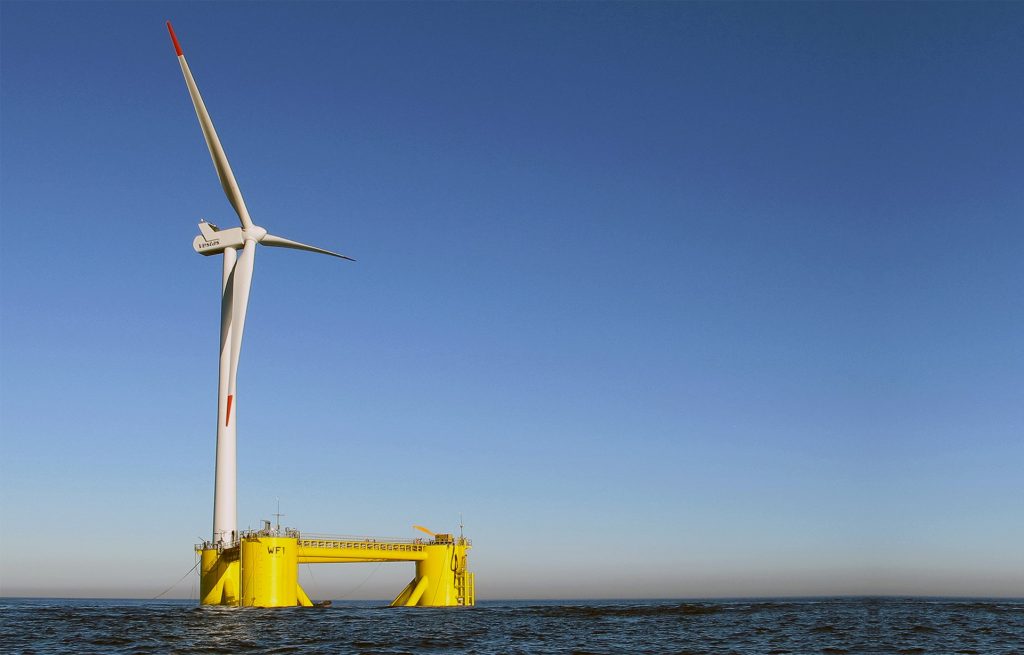 Ten miles off the coast of Aberdeen in Scotland, five turbines tower over the North Sea.

Each is as tall as the giant towers of Canary Wharf in London’s docklands.

It helps solve an engineering riddle. And its designers believe it shows how offshore wind can become a truly global energy source.

In much of the world, the seabed takes a sudden dive close offshore, ruling out the use of conventional offshore wind turbines.

These are built up from the sea floor on concrete foundations and can only be deployed in relatively shallow water, up to about 60m.

The solution sounds obvious – installing turbines on floating platforms – but imagine for a moment the fearsome forces these structures must withstand.

The turbines at the Kincardine wind farm must stand tall in the heaviest swells and fiercest storms the tempestuous North Sea brings their way.

The success of the technology draws on Britain’s expertise in offshore engineering, honed as it developed the oil and gas resources in the North Sea.

Each tower sits atop three huge cylindrical floats. They are painted bright yellow and welded into a triangular platform each side of which is 67m long.

This is not a passive structure, explains Greg Campbell-Smith, of Principle Power, the UK company that developed the platform technology.

The floats need to adapt to changes in the wind and sea conditions. In strong winds the tower “heels” or leans away from the wind, says Mr Campbell-Smith.

A network of pumps and valves shift liquid ballast between the three floating cylinders to rebalance the platform and set the turbine at the ideal angle for the wind.

Below the surface, weighted subsea cables attached to huge anchors make sure the platform is firmly secured to the seabed.

It says it produces enough electricity each year to power 35,000 British homes.

But it faces stiff competition. Companies around the world are producing their own designs for floating wind platforms.

Last month the US government offered $50m of new funding to encourage American companies to install 15GW of floating wind in US waters by 2035.

The aim is to drive down costs by 75% and “help the US lead on offshore wind”, according to the White House.

There is certainly a huge potential market.

The UK’s independent climate advisors, the Climate Change Committee (CCC), says that about half of the 100GW of offshore wind it expects will have been installed by 2050 will be on floating platforms.

The technology could deliver £43bn of economic activity, employing up to 29,000 people, according to estimates by the UK offshore wind industry association RenewableUK.

And the global prospects are even more promising.

Some two-thirds of the US potential for offshore wind is reckoned to be in deep water, 80% of the European seabed is all only accessible using floating technology and much of the sea off Japan is also deep.

Floating wind is set to be a £400-5000bn global market by 2050, calculates the Offshore Renewable Energy Catapult, a UK research centre for offshore wind technology.

The big challenge now is cost. This new technology is expensive. Kilowatt hour for kilowatt hour, floating wind comes in at about the same price as new nuclear power.

But, unlike nuclear power, the expectation is that costs will tumble as the market grows.

Solar panel prices have fallen by 90% since 2010 as the technology has been rolled out at scale.

But the industry warns that investment will be needed to deliver on the promise this new technology holds.

It requires deep ports with huge workspaces to allow the manufacturing and assembling of the vast floating structures.

Oil and gas platforms tend to come as one-off orders, but floating wind platforms will need to be constructed on a “production line”.

The biggest floating wind farms will consist of 100 or more platforms.

The UK government has promised £160m to beef up the country’s port infrastructure but RenewableUK believes more investment will be needed.

And although Britain is the first country to successfully deploy floating wind at scale, there are limits to its ability to harvest the rewards of its efforts.

Boris Johnson famously wanted the UK to become the “Saudi Arabia of wind” – owning most of its energy industry – but his boast always rang hollow.

Most of the UK’s turbines are built by British workers but in factories and on wind farms owned and operated by foreign firms.

Nevertheless, the industry is adamant that floating wind represents a huge opportunity for the UK.

“Everything that is happening here in the subsurface world is something the UK can really be masters at,” says Dan McGrail the CEO of Renewable UK.

“It is incredibly exciting because it signifies the opening up of offshore wind to the entire globe,” he says.